Sue Worrall of www.healthhubacademy.com shares her thoughts on digestive health with us

The digestive system is a group of organs responsible for the conversion of food into nutrients and energy needed by the body. In humans, the digestive system consists of the mouth, oesophagus, stomach and small & large intestines. The digestive tube made up by these organs is known as the alimentary canal.
Several glands – salivary glands, liver, gall bladder and pancreas – also play a part in digestion. These glands secrete digestive juices containing enzymes that break down the food chemically into smaller molecules that are more easily absorbed by the body. The digestive system also separates and disposes of waste products ingested with the food. 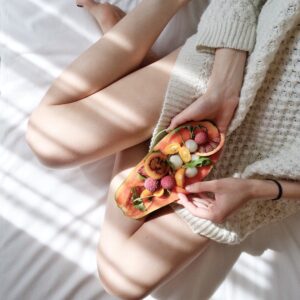 Ingestion
Food taken into the mouth is first broken down into smaller pieces by the teeth. The tongue then rolls these pieces into balls called boluses. Together, the sensations of sight, taste, and smell of the food cause the salivary glands, located in the mouth, to produce saliva. An enzymes in the saliva called amylase begins the breakdown of carbohydrates (starch) into simple sugars.

The bolus, which is now a battered, moistened, and partially digested ball of food, is swallowed, moving to the pharynx (throat) at the back of the mouth. In the pharynx, rings of muscles force the food into the oesophagus, the first part of the upper digestive tube. The oesophagus extends from the bottom part of the throat to the upper part of the stomach.

The oesophagus does not take part in digestion. Its job is to move the bolus into the stomach. Food is moved through the oesophagus (and other parts of the alimentary canal) by a wavelike muscular motion known as peristalsis (pronounced pear-i-STALL-sis). This motion consists of the alternate contraction and relaxation of the smooth muscles lining the tract.

Digestive System Parts And Their Function

Alimentary canal: Tube formed by the pharynx, oesophagus, stomach, and intestines through which food passes.

Amylase: Digestive enzyme that breaks down carbohydrates to simple sugars.   Bile: Bitter, greenish liquid produced in the liver and stored in the gall bladder that dissolves fats.

Bolus: Battered, moistened, and partially digested ball of food that passes from the mouth to the stomach.

Carbohydrate: A compound consisting of carbon, hydrogen, and oxygen found in plants and used as a food by humans and other animals.

Chyme: Thick liquid of partially digested food passed from the stomach to the small intestine.

Enzyme: Any of numerous complex proteins that are produced by living cells and spark specific biochemical reactions.

Esophagitis: Commonly known as heartburn, an inflammation of the oesophagus caused by gastric acids flowing back into the oesophagus.

Peristalsis: Wavelike motion of the digestive system that moves food through the system.

Proteins: Large molecules that are essential to the structure and functioning of all living cells.

Ulcer: Inflamed sore or lesion on the skin or a mucous membrane of the body.
Villi: Finger like projections found in the small intestine that increase the absorption area of the intestine.

Gastric juice is secreted from the linings of the stomach walls, along with mucus that helps to protect the stomach lining from the action of the acid. Three layers of powerful stomach muscles churn food into a thick liquid called chyme (pronounced KIME). From time to time, chyme is passed through the pyloric sphincter, the opening between the stomach and the small intestine.

Digestion And Absorption In The Small Intestine

The duodenum is about 10 inches (25 centimetres) long and connects with the lower portion of the stomach. When chyme reaches the duodenum, it is further broken down by intestinal juices and through the action of the pancreas and gall bladder. The pancreas is a large gland located below the stomach that secretes pancreatic juice into the duodenum through the pancreatic duct. There are three enzymes in pancreatic juice that break down carbohydrates, fats, and proteins. The gall bladder, located next to the liver, stores bile produced by the liver. While bile does not contain enzymes, it contains bile salts that help to dissolve fats. The gall bladder empties bile into the duodenum when chyme enters that portion of the intestine.

The jejunum is about 8.2 feet (2.5 meters) long. The digested carbohydrates, fats, proteins, and most of the vitamins, minerals, and iron are absorbed in this section. The inner lining of the small intestine is composed of up to five million tiny, finger like projections called villi. The villi increase the rate of absorption of nutrients into the bloodstream by greatly increasing the surface area of the small intestine.
The ileum, the last section of the small intestine, is the longest, measuring 11 feet (3.4 meters). Certain vitamins and other nutrients are absorbed here.

Absorption And Elimination In The Large Intestine

The large intestine is wider and heavier than the small intestine. However, it is much shorter – only about 5 feet (1.5 meters) long. It rises up on the right side of the body (the ascending colon), crosses over to the other side underneath the stomach (the transverse colon), descends on the left side, (the descending colon), then forms an s-shape (the sigmoid colon) before reaching the rectum and anus. The muscular rectum, about 6 inches (16 centimetres) long, expels faeces (stool) through the anus, which has a large muscular sphincter that controls the passage of waste matter.

The large intestine removes water from the waste products of digestion and returns some of it to the bloodstream. Faecal matter contains undigested food, bacteria, and cells from the walls of the digestive tract. Millions of bacteria in the large intestine help to produce certain B vitamins and vitamin K. These vitamins are absorbed into the bloodstream along with the water.

Disorders Of The Digestive System
Among the several disorders that affect the digestive system are esophagitis (heartburn) and ulcers. Esophagitis is an inflammation of the oesophagus caused by gastric acids flowing back into the oesophagus. Mild cases of this condition are usually treated with commercial antacids.

Until the early 1990s, the medical community generally believed that ulcers were caused by several factors, including stress and a poor diet. However, medical researchers soon came to believe that a certain bacterium that can live undetected in the mucous lining of the stomach was responsible. This bacterium irritated and weakened the lining, making it more susceptible to damage by stomach acids.